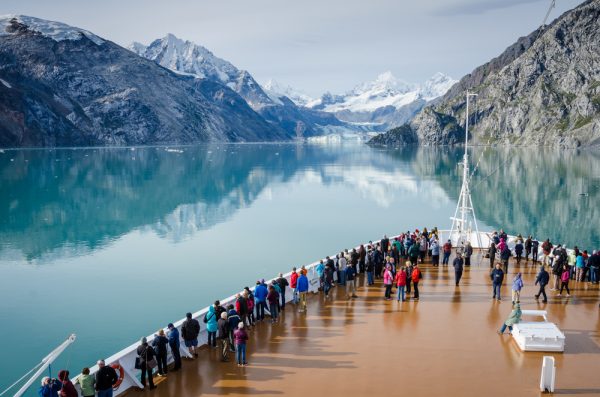 Stretching for more than 1000 miles, the Inside Passage is a seaway between the southeast coastline of Alaska and a narrow string of islands to the west. It ends in Skagway, about 90 miles north of Juneau. From gold rush day clippers up to today’s mega cruise ships, the passage is the navigator’s preferred route between Seattle/Vancouver to Anchorage. as the interior straits are much calmer than the rough Pacific Ocean side.

There's nothing quite like experiencing the Last Frontier from a cruise ship: icebergs and rugged islands glide by, porpoises play in the ship's wake, and whales breach off the side. In Alaskan towns along the way, you can shake a gold pan in a rushing stream, watch native carvers at work on a new totem pole, and casually swap tales of each day’s experience at a vintage watering hole. Optional shore excursions offer a variety of adventures from rafting down whitewater streams to flightseeing and landing on glaciers.

This is a day when all passengers are on the top deck with binoculars in hand watching for humpback whale, porpoise, harbor seals, and the most anticipated sight, the calving of a glacier.

Glacier Bay is a 65 mile waterway containing 16 tidewater glaciers which is more than any other destination in the world. Since 1980, it has been protected as a 3.2 million acre U.S. National Park which limits the amount of cruise ships allowed in its pristine waters. Cruise ships enter the bay via Icy Straits near Gustavus in the morning and usually pick up two park rangers who will make commentary as native wildlife appear. This is a day when all passengers are on the top deck with binoculars in hand watching for humpback whale, porpoise, harbor seals, and the most anticipated sight, the calving of a glacier. Calving is when a large piece of ice breaks off a large glacier and plunges into the water. There is a hush in the chilly air as cruisers witness (and video) the creaking and sliding of the icy mass. For most cruisers this experience is the highlight of their Alaska adventure.

Cruisers have a routing choice to take a round trip journey through the passage which utilizes Glacier Bay as a turnaround point before returning to the ship’s original southern port in either Vancouver or Seattle. Along the way you’ll visit. Alaska ports which could include Ketchikan, Skagway, Sitka and Juneau.

The alternative itineraries, the Gulf of Alaska cruises, offer travel one-way routing between Vancouver, British Columbia and Seward, Alaska which also includes some of these same ports and a day in Glacier Bay or College Fjord. After disembarkation passengers can then make connections through Anchorage to add excursions into the interior of the state with Denali National Park high on the “must see” list to catch a glimpse of Mt. McKinley. Return flights south generally depart from Fairbanks or Anchorage.