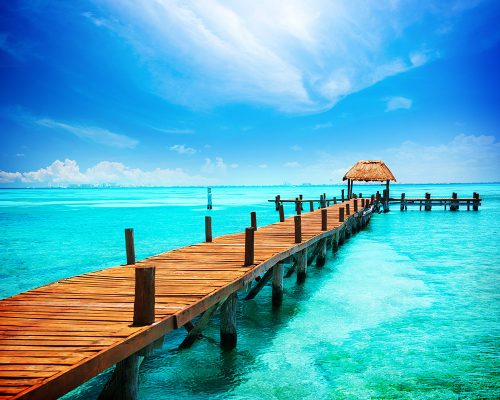 With more than 32,000 hotel rooms, Cancun is the no-hassle beach mecca vacation destination. With its modern international airport, you can conveniently fly in and out from major US gateways for several days and soak up the sun without speaking a word of Spanish (or exchanging U.S. dollars). There are actually two Cancuns: the Zona Hotelera (Hotel Zone) on the island and "Ciudad" Cancun (better known simply as "downtown"), a business and residential district on the mainland. All of the beautiful beaches in front of its palatial hotels are public, so grab your flip flops and check out the waves while admiring these architectural wonders.

There are no street addresses on Cancun island because there's really only one road—Boulevard Kukulcan. Places on the island are located by their distance (in kilometers) from the northern end of the boulevard, which begins at the edge of downtown Cancun. Markers indicate every kilometer along the side of the road. For example, the bridge that connects the northern tip of the island to the mainland is just past the Kilometer 4 marker; the southern bridge to the mainland is at Kilometer 25.

Cancun's spas, almost all of which are located within four- or five-star hotels, are some of the most sophisticated in the country. Besides yoga, Pilates, exercise rooms and pools, many adhere to the ancient healing practices of the Yucatan Maya, who incorporated regional plants, flowers, fruits and herbal lore into massages and body treatments. Others use sleep therapy, aromatherapy, hot stones, coffee and chocolate to detoxify and rejuvenate. Sun worshiping, snorkeling, salsa dancing are a great complement to a spa retreat!

While there is plenty of glitz and beautiful people in Cancun, this destination is also rich in ancient culture. Those interested in learning about the ancient Maya civilization can visit several exceptional archaeological sites on day trips. Tulum, on the coast south of Cancun, is the closest, but if times permits, head to Chichen Itza. Voted one of the New Seven Wonders of the World, this Mayan center is the most famous and a UNESCO World Heritage site. Coba, the least developed of the three, is in a vast, shady jungle, making it ideal for an afternoon visit.

Also within reach is the island of Cozumel, a haven for divers and snorkelers. Punta Sur on Isla Mujeres, the closest island to Cancun, is the place to go to see the first light of day as it strikes Mexican soil. It's the easternmost point of Mexico.