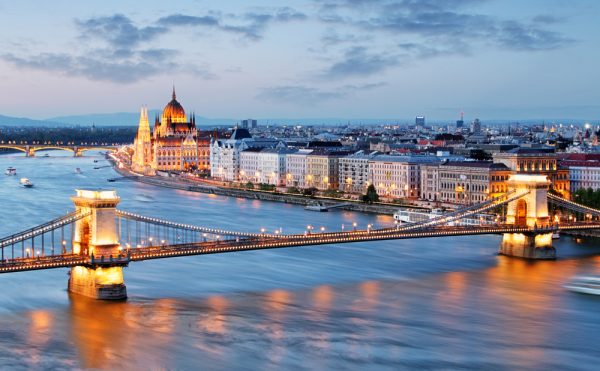 Budapest, along the beautiful Danube River in Hungary, is a city of illumination for river cruise passengers whether you are beginning or ending your journey. Your extra time here will allow for a perfect visit to savor this 1100 year old city during the daytime and be mesmerized by the reflection in this mighty river of its lighted bridges and buildings in the evening. Violins and hammered piano-like strings will beckon you into cafes to sample regional delicacies laced with paprika, freshly baked breads and excellent wines.

In 1873, Buda and Pest were united into one city, Budapest, which became the capital of Hungary. The city underwent expansion and mass development through the end of the 19th century. During that period, the large boulevards were laid out and many of Budapest's landmark buildings were erected. You’ll be taken aback by the stately 19th century government buildings, elegant wide shopping streets, and pedestrian passages created during the reign of the last Austro-Hungarian emperor, Franz Josef and his wife Elizabeth. While much has transpired politically since this era with two World Wars and Soviet occupation from 1945 until 1989, monuments and artistic tributes adorn the city and share many a story of the this nation’s proud heritage.

How does one know if they are in Buda or Pest? Buda has hills.

Budapest's most seductive element is water. It springs from underground wells, filling Ottoman spas, baroque and art-nouveau pools. It flows through the middle of the city in the broad and meandering Duna (Hungarian spelling) River, dividing Buda (on the west) and Pest (on the east). Seven bridges, in addition to two railway bridges, span the divide. Hills, islands and parks coexist with hotels, theaters, musical venues, cafes, monuments and other buildings in an eclectic array of architectural styles, but most noticeably art nouveau!

How does one know if they are in Buda or Pest? Buda has hills. Castle Hill is home to some of the city's most visible landmarks, including Buda Castle, Gellert Hill, the cathedral, and the city's Turkish baths. By comparison, Pest is flat. The grand Parliament building dominates the Pest embankment and skyline. You’ll find Heroes’ Square, the Opera House, a covered bazaar, coffee houses, restaurants and Europe’s largest Synagogue. Similar in feel to Vienna, Emperor Franz Josef created a ring road called Vaci utca. Enjoy a nice walk or catch the city’s metro to follow the nouveau art studded boulevard Andrassy ut which runs from the banks of the Danube to the edge of Varosliget, the main city park. The entire city of Budapest is a UNESCO World Heritage site to be cherished for centuries to come.