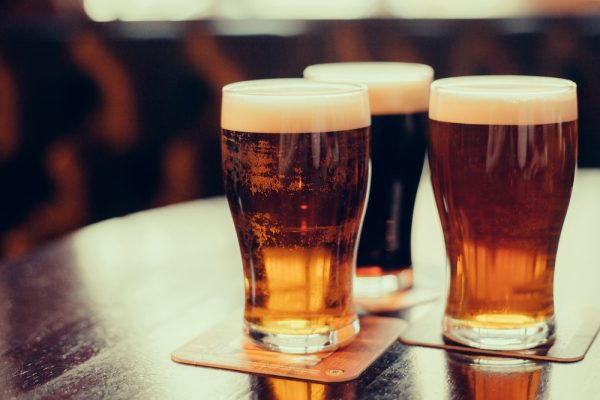 Alaska and the Yukon is a must see and do travel destination. Be captivated by the world’s most pristine and dramatic landscapes. Escape from the everyday surrounded by a culture and lifestyle you wish you could take back home. But the vastness of Alaska and the Yukon doesn’t mean the Great Land is void of civilization and fun leisure-time pursuits. Plan a craft brew quest to go with your land and rail journey or cruise of the glaciers and Inside Passage with Holland America Line. Every stop along your Alaska and Yukon trek features a popular craft brewery.

The first stop along the inside passage is Juneau, the state capital and home of the Alaskan Brewing Company. Among their seasonal and limited edition beers, try the White for a smooth, crisp taste and the Amber for bit more body, but no bitterness.

Next stop is Skagway and the Skagway Brewing Company. On their website, its says they are dedicated to creating fresh unfiltered ales using hydroelectricity and pure untreated Alaskan water, Brewer Trevor Clifford makes five staple ales (and a couple others as time and creativity allows): Prospector Pale, Chilkoot Trail IPA, Boom Town Brown, Blue Top Porter, and their signature beer, Spruce Tip Blonde Ale, in which one of the hops additions are substituted with handpicked Sitka Spruce tip buds native to the area. This signature ale has been featured in Draft Magazine twice (“50 Beers, 50 States” January 2010 and “Pubs we love: Cold weather brewpubs” February 2011) and also in Ben McFarland’s World’s Best Beers: 1000 Unmissable Brews from Portland to Prague. The Brew Co.’s handcrafted ales are only available at the pub where one can enjoy a glass or a sampler flight served fresh from holding tank to tap. Boom Town Brown is a nine grain American brown ale has a complex, malty profile and a subtle British hop influence. Traces of nut, chocolate and caramel are woven throughout this approachable version.

Heading north into the Yukon visiting Whitehorse, the provincial capital and a day later Dawson City, the historic site of the Klondike Gold Rush, you can enjoy the beers of the Yukon Brewing Company. My favorites were the Chilkoot Lager, their best selling beer and the closest to mainstream beers for someone needing a good introduction to craft beers, and Yukon Gold, a mix of five malts with a subtle character and citrusy finish, almost a non-ale according to their website.

While in Fairbanks, check out HooDoo Brewing Company, where they harness solar power for their brewery operations. The brewery features a European-style tap room carrying its own German Kolsch, a process found in Cologne Germany. In the Denali National Park area, there is the 49th Site Brewing Company in Healy and the Denali Brewing Company in Talkeetna. This is a large operation with many varieties including Belgians, Hefeweizens, Scottish and Irish Red Ales, and much more.

End your Alaskan adventure in Anchorage but not before you try Glacier Brewhouse. The brewery specializes in English and American West Coast style beers along with an elaborate oak aging program. On their website the process is described in this way, “Our cask conditioned ale undergoes a secondary fermentation in the cask which creates a natural creamy carbonation. Additional hops are added directly into the cask to provide intense floral, citrus and fruity aromas and flavors.”

Enjoy your trip up north. Think of it as a 12-day beer tasting. I guarantee you will be searching for these beers in the lower 48. Some can be found but some not yet. Maybe some day. Or just go back to Alaska and the Yukon to drink your favorites once again.