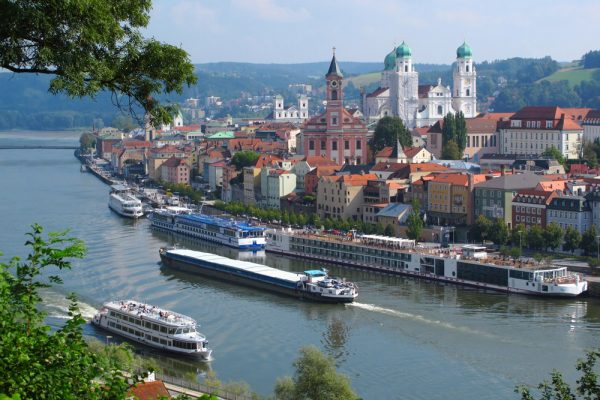 Passau on the Danube River

Flowing through six countries, the Danube meanders for nearly 1,800 miles — from Germany’s Black Forest through Austria into the Balkans before dumping into the Black Sea. To cruise the entire length will take 14 days, so most river cruise companies will break it into two seven day itineraries. The most popular of the two itineraries is from Nuremberg, Germany to Budapest, Hungary which allows passengers to witness an amazing spectacle: crossing Europe’s Continental Divide. To accomplish the seemingly impossible task, a narrow river vessel must transit a series of 16 locks over a distance of more than 100 miles to lift (or lower) itself nearly 1,400 feet. Immortalized in Strauss’s Blue Danube Waltz, the Danube River (Donau in German) is full of surprises for those who embark on Continental Europe’s most popular river for cruising.

The center of the Nazi Party in the 1930s, Nuremberg was virtually destroyed during World War II. Only a few historic buildings and the rally grounds survived the severe bomb damage, but the medieval city itself has been restored. Nuremberg also hosts the world’s largest Christmas Market, featured on Christmas Market cruises during the month of December.

Your next cruise stop heading south is Regensburg, Germany. This precious city was practically untouched during World War II. Dating back to Roman times Regensburg is the oldest on the Danube, tracing its history back nearly 2,000 years. Still standing are the Roman gates, Porta Pretoria, built in 179 A.D. Be sure to visit the Cathedral, regarded as the best example of Gothic architecture in Bavaria. Construction was started during the second half of the 13th century and was finally completed in 1525.

Next stop while still in Germany is Passau. Your cruise guides will offer a walking tour of this fascinating junction of several waterways. You can look forward to St. Stephen’s Cathedral, which features the world’s largest church organ (17,774 pipes and 233 registers).

Most river cruise companies also offer several full day optional excursions to Austria’s Lake region, Salzburg (birthplace of Mozart and the setting for the acclaimed musical, “The Sound of Music”), or into the Czech Republic. Passengers depart during the morning from Passau and board in the late afternoon farther down river.

Once you enter into Austria two villages will tempt you in the famous wine region called the Wachau Valley which extends 20 miles. In Melk the baroque Benedictine Abbey is perched 200 feet above the river on a rocky outcrop. Your guided tour will take you inside to witness a spectacular museum, library, and chapel. The manicured gardens will beckon a stroll too.

Just a few miles south is the small village of Durnstein with its blue tower of the Collegiate Church of the Augustinian Convent at the river’s edge and the ruined fortress of Kuenringerburg on the hill above.

Now prepare yourself for the two crown jewels of the Danube. Vienna today is robed in 18th-century charm and 19th-century grandeur. Spectacular imposing architecture was erected by Emperor Franz Josef once the medieval city wall was removed and the elegant Ring street (Ringstrasse) was built to encircle and showcase the historic old city. In the heart of the old city (Alt Stadt) are the ancient streets and hidden courtyards around St. Stephen's Cathedral (Stephansdom). Other key sights include the Opera House, Spanish Riding School, the Hofburg imperial apartments of the Hapsburg dynasty, Schonbrunn Palace, and Belvedere Palace. Don’t miss the Wiener Volksprater with its famous ferris wheel for great city views.

Budapest is fondly referred to as the Queen of the Danube with its two twin cities of Buda and Pest straddling the historic Danube River. This is a walking city with sensuous temptations each step along your walk. Stroll easy and take it all in as you gaze upon the spectacular Hungarian Parliament building, with its Neo-Gothic façade in Pest, and the gardens and terraces of the royal Palace and Fisherman’s Bastion in Buda.