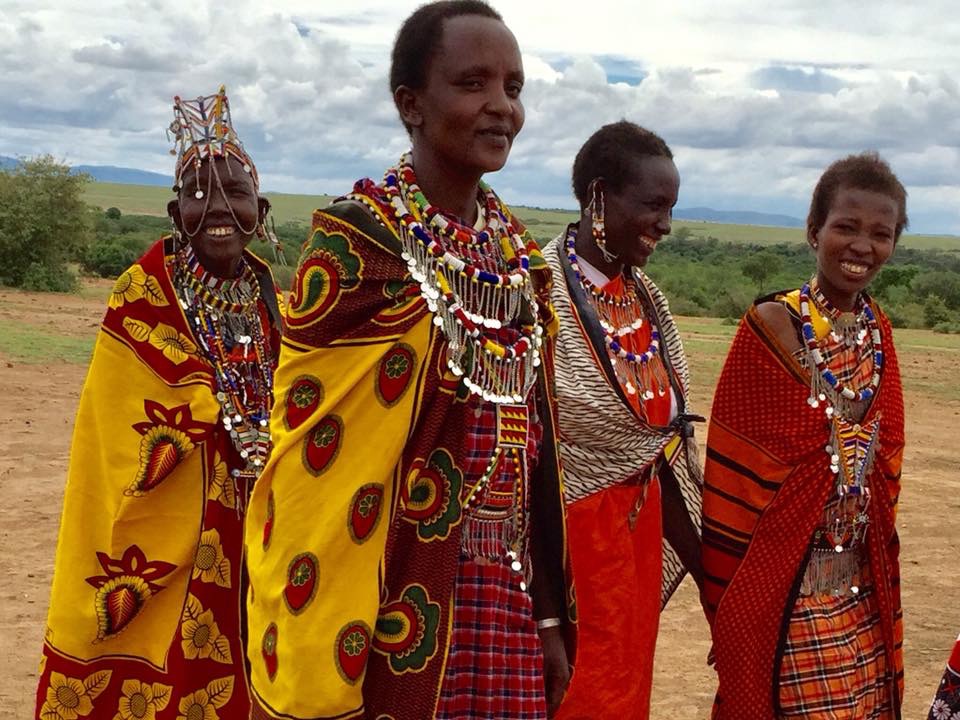 After a very long day of travel from Chicago to Nairobi through 8 time zones and 16 hours of flying on KLM we arrived at 11:00pm to the beautiful Nairobi Serena hotel. The hotel is located in the downtown area, near several embassies and consulates. This hotel featured nice rooms, a large heated pool and included a wonderful breakfast buffet.

With not much time to enjoy the amenities of the Serena Hotel, we met are driver/guides, loaded people and their gear into the assembled Toyota Land Cruisers and departed at 7:45am the next morning. The newer model land cruisers seat 8 including the driver with 4 rows so each person can have a window view. It is critical to pack light as your luggage travels with you in the vehicle.

Our trip from Nairobi was a 6 hour drive to the Mara Leisure Camp in the Maasai Mara game reserve. The tented camp was situated along a shallow river and the nice platform tents featured a porch, shower, sink, toilet, and canopy queen bed. The property and its 22 tents ran on a generator and the power was shut off from midnight to 6:00am. All tent camps on the trip featured solar water heaters for each tent, so the hot water was always available, power or not. If you forgot a flashlight, you were given one. The security staff patrolled the property and escorted you from your tent to the lobby and restaurant. A nice outdoor pool was situated near the lobby. The buffet had a large variety of good food and desserts. Each camp had a well stocked bar with domestic and imported beer, wine and liquor. Wi-fi here is available only in the lobby and when the power is on. 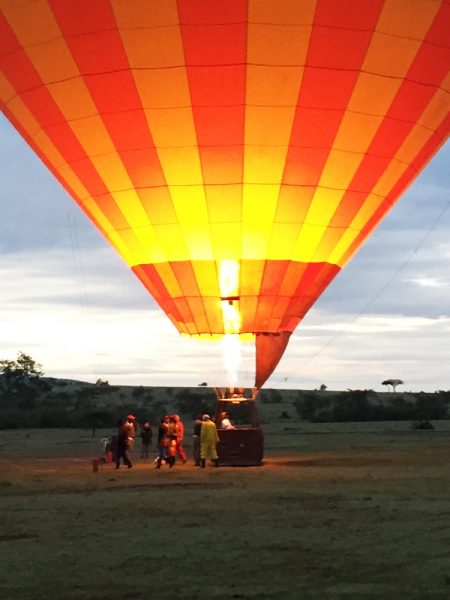 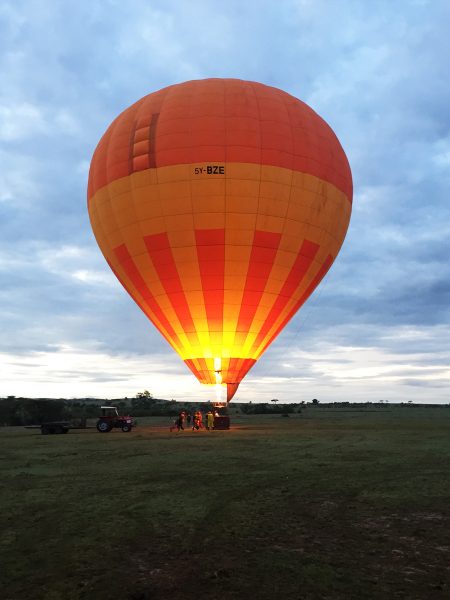 Most of our group signed up for the exciting sunrise balloon ride, so a 5:00 am departure was necessary to reach the launch area an hour away. Our two balloons held 12 passengers each and our young, but experienced pilot was from Indiana. The ascent was spectacular and ranged from treetop level to several thousand feet. As we descended the unpredictable wind blew us outside of the game reserve. We made a gentle touchdown in a local Maasai farmer’s field. As villagers ran to get a glimpse of this strange sight, our pilot remarked it will cost him $50.00 for trespassing. When the chase vehicles arrived, we climbed out of the basket and were immediately surrounded by dozens of excited kids. We even caught sight of a few Maasai taking pictures of us with their cell phones. By the way, if you really need to take those phone calls, cell service was available almost the entire trip, including the middle of the Serengeti. We arrived at a pre-arranged area in the wide open range where we sat at long tables enjoying a champagne breakfast of sausage, quiche, yogurt, pastries, fruit and juice. 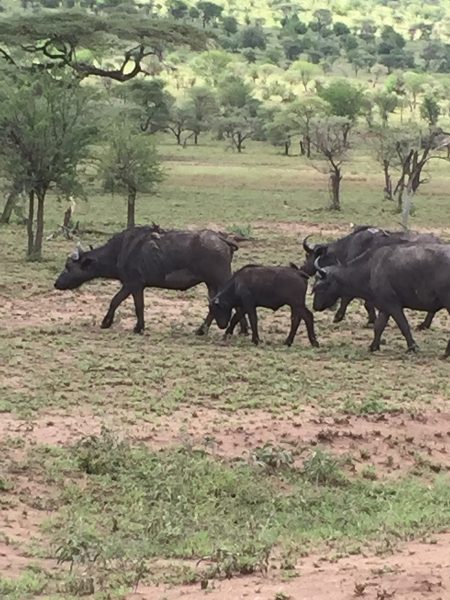 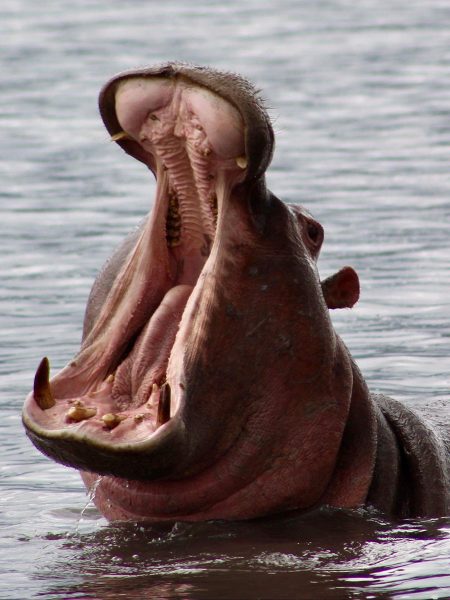 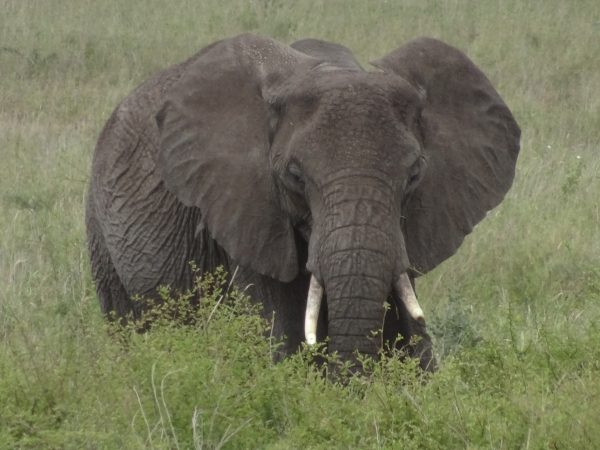 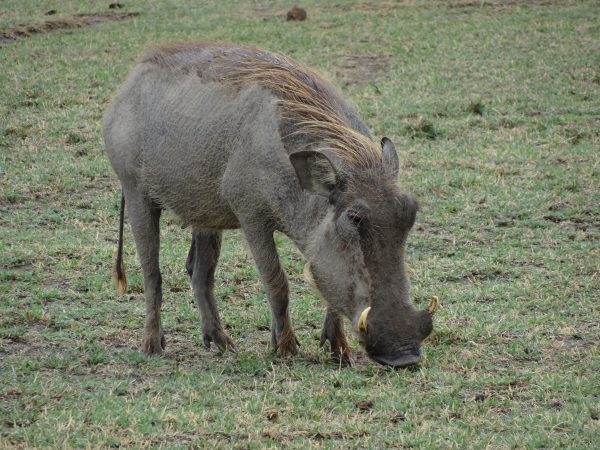 We continued our game drive until four o’clock in the evening. The incredible wildlife included three of the big five that day—elephants, cape buffalo and lions. We also viewed wart hogs, wildebeests, topi, cheetahs, hyenas, and ostriches. A visit to a Maasai village where we were charged $20.00 per person was fascinating. After an introduction, the women and the men performed separate tribal dances.

This included the jumping dance where once a year, the man who jumps the highest will not have to pay his dowry of cows and sheep for a bride. Maasai men are allowed to have many wives so they value their herds of cattle. We then separated into small groups and were guided around the village and peeked inside the mud huts where the Maasai live. The houses are very small and you had to almost crawl in. 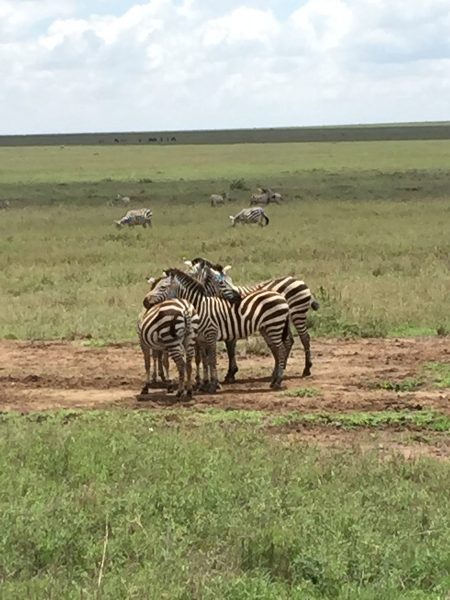 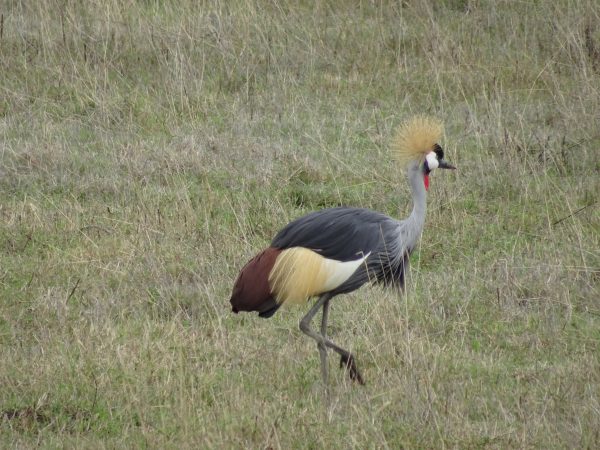 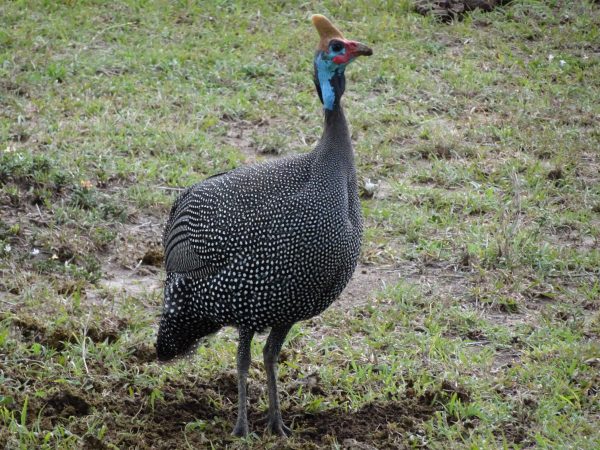 The floors are dirt and the front part of the small house is used for baby goats and cows at night. The next room is open for a kitchen with a fire pit and dense smoke filled the entire hut. The small bedroom is off to the side consisting of a wood bed on a dirt floor. There are no doors. Behind the village was a ”gift shop” where the women wanted to sell you homemade bracelets, and other overpriced souvenirs. Bargaining is expected.

Our departure the next morning was 7:00am for a 9 ½ hour journey to Tanzania and the Serengeti game reserve. Kenyan roads in this area are bone jarring, washboard dirt tracks that took us to the border of Kenya/Tanzania. Upon arrival in Tanzania, we paid $100 cash for a visa fee. Due to regulations we left our Kenyan guides and vehicles and met our new Tanzanian guides and their Toyota land cruisers.

A wonderful smooth paved road awaited us for the next 4 hours until we arrived at the Serengeti park entrance. At the entrance we were once again on rough dirt roads for another hour to camp. Box lunches were provided from the hotel and bathroom stops were your choice of bushes. We arrived at the Serena Kirawira Tented Camp where 25 luxury tents are situated on a hill and all rooms have a deck overlooking the Serengeti. Wifi is available throughout the camp and power was on 24/7. Meals were ordered from a menu with a good selection of tasty food available. Each room had a lion alarm on the headboard to press in case of emergency or if animals were near. A morning wake-up call consisted of coffee and muffins delivered to your room. If you sat on your porch, the monkeys would try to steal your muffins. You needed an escort from sundown to sunrise because of the wild animals roaming nearby. At night you could hear the lions roar.

The Serengeti game drive was a full day. Our driver/guide was in constant radio contact with other vehicles and if any interesting or hard to find animals were spotted the word was sent out. When game was spotted or requested by someone in the vehicle, drivers stopped for viewing and photo ops. The convenient popup roofs made viewing easy and safe and they were left up during the entire drive. Wi-fi was available in the vehicles. Our camp provided a boxed lunch stop. A nice hill with a few scattered picnic tables was selected and the Zebra truck, a Serengeti food truck, was on site to provide additional drinks and snacks. We returned back to camp at 6:00pm in time for dinner. Because we had two birthdays in the group, the wonderful, attentive staff baked a cake and the entire wait staff and our drivers sang happy birthday in Swahili. It was quite a show! 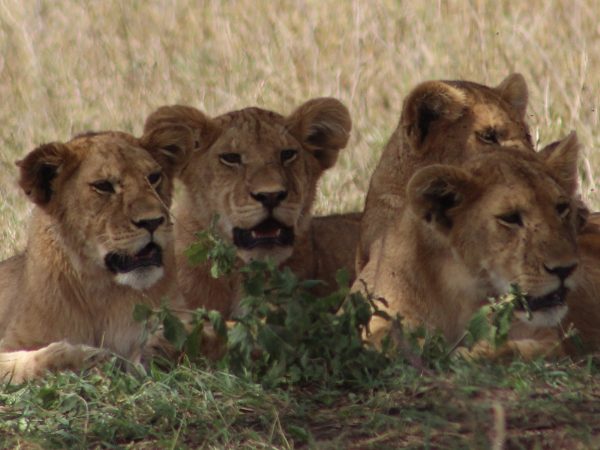 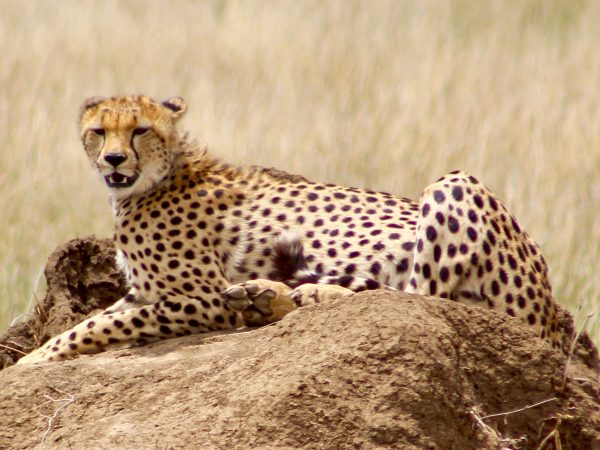 Day 6 started with a game drive in the morning and then we continued onto Ngorongoro crater. Along the way we visited the Olduvai Gorge Museum (in the middle of nowhere) founded by Mary Leakey.

The museum recently opened in October of 2017 and is dedicated to the understanding of the Olduvai Gorge, archaeological discoveries and fossil sites. A lecture was given on the importance of this research site. We stayed at the Serena Safari Lodge at the rim of the crater where all rooms had a view of the crater and evening entertainment was provided with local musician and dancers.

A full game drive was in store for us as we looked to complete sightings of the Big Five. Light rains kept the black rhinos in hiding. We did however visit a hippo pool and a monkey refuge. We spotted flamingos, ostriches, elephants, lions, zebras and the ever present wildebeests.

Another long day awaited us as we headed back to Kenya to visit Amboseli game reserve. The Arusha Coffee Plantation was our stop for a buffet lunch before continuing on to the border crossing of Tanzania/Kenya. We did not have to pay another visa fee, however we had to unload our luggage for customs. We had stopped at the best gift shop of the trip along the way and many of us carried our souvenirs in plastic bags. Since Kenya has banned the use of plastic bags we had to scramble to stuff these items in our suitcases before we were allowed to exit the building. We left our Tanzania vehicles/drivers and picked up our Kenya vehicles/drivers. Immediately upon arrival in Kenya, the rough roads returned. We had another 4 hour drive and arrived after dark at the Amboseli Serena Safari Lodge. Each of the 92 rooms had painted walls of local animals.

The Amboseli game reserve is known for its many elephant herds and variety of birds in the swamp area. We saw beautiful views of snow capped Mt. Kilimanjaro. At 1:30pm we left camp for Nairobi, a distance of 155 miles which took over 6 hours. We went directly to the Carnivore Restaurant, a Brazilian steak house. We dined on beef, ostrich, turkey, lamb, chicken, crocodile all of which was cooked over an open pit. We arrived at our starting hotel the Nairobi Serena hotel about 9:00pm.

Our last day in Kenya, we visited the David Sheldrick Wildlife Trust, an elephant orphanage-rehabilitation program. Next was a visit to Karen Blixen’s house, made famous by the movie and book, Out of Africa. Lunch was served at Karen’s Coffee Gardens. We returned early afternoon to the Serena Hotel where we were able to keep our rooms until 6:00pm and departed for the airport at 6:30pm for a midnight flight to Amsterdam. Upon arrival at the Nairobi airport, we were told to disembark the bus and walk through security. A customs officer boarded our bus to make sure we were not taking anything illegal out of the country.

Acacia Holidays was our tour company and was chosen as Joshua, the owner of the company lives in Nairobi. Joshua greeted our group at the hotel upon arrival and attended the farewell dinner at the restaurant and said good-bye to us as we departed for the airport the last day. We were very pleased with the accommodations, food and driver/ guides. We were told the roads were rough, but you must experience it to believe it. There is probably no other area of the world where you can view the variety and multitude of wildlife this up close and personal! The only change of the itinerary we would suggest would be to add a day of free time for relaxation and to enjoy the pool at one of the tented camps. Our tour participants felt this was an adventure of a lifetime and were willing to overlook the “rough spots”. Kenya and Tanzania are truly developing countries, but as a very good client of ours says... If you want it to be like home, stay at home.