The Dome of the Rock

Israel, Land of Creation
A faith based Christian tour and travel blog

Our journey began by boarding United Airlines from Chicago to Tel Aviv with a change of planes in Newark for our 10 hour flight. Upon arrival at Ben Gurion International Airport, named after the first prime minister of Israel, we travelled 45 minutes to stay at the beautiful Hilton Hotel situated on the Mediterranean Sea. All rooms have a balcony facing the sea so the sunrises and sunsets are spectacular. The Hilton Hotel is located in Embassy Row with the British Embassy being across the street. Tel Aviv, founded in 1909, known as the White City because of over 4,000 white Bauhaus style buildings constructed by Jewish German immigrants between 1920-1930. Today the White City is a UNESCO World Heritage site.

A night walking tour of Tel Aviv’s Independence Trail featured 10 designated historical locations connected to the independence of Israel. This trail is scheduled to open in April of 2018 to coincide with Israel’s 70 years of independence.

A morning tour of the ancient port of Jaffa included a visit to Simon the Tanner’s House where Peter, one of Jesus Apostles, resided in Jaffa and had a dream (Acts 10:5-6). Another visit included a statue of the whale (the book of Jonah). Today Jaffa is a seaport for small yachts as it is a very shallow port. Along the port are many restaurants and shops to enjoy.

An hour drive north of Tel Aviv are the ancient ruins of Caesarea built under Herod the Great during 25-13BC. The ruins located on the Mediterranean Sea include a Roman amphitheater and the remains of a hippodrome. Today the restored amphitheater hosts modern-day concerts. 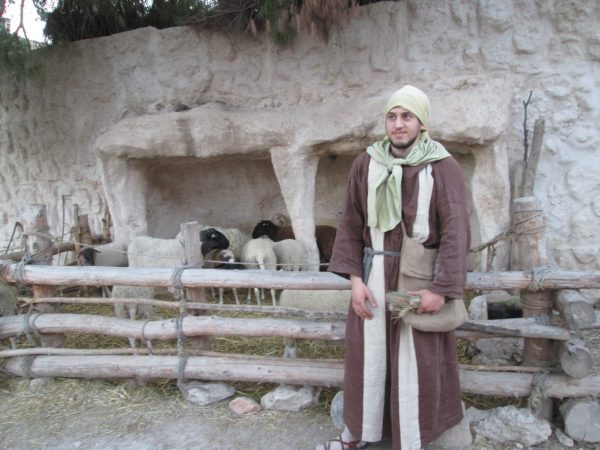 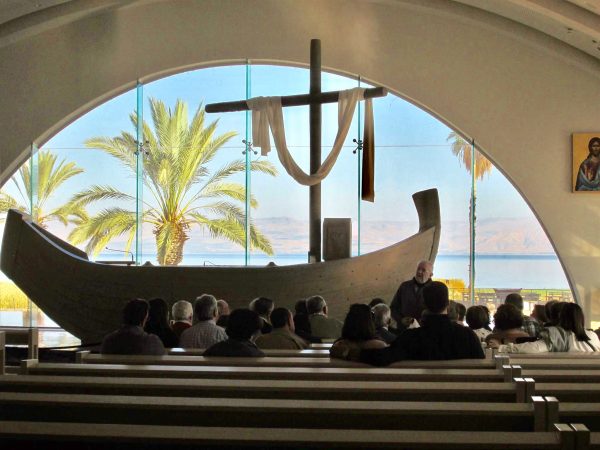 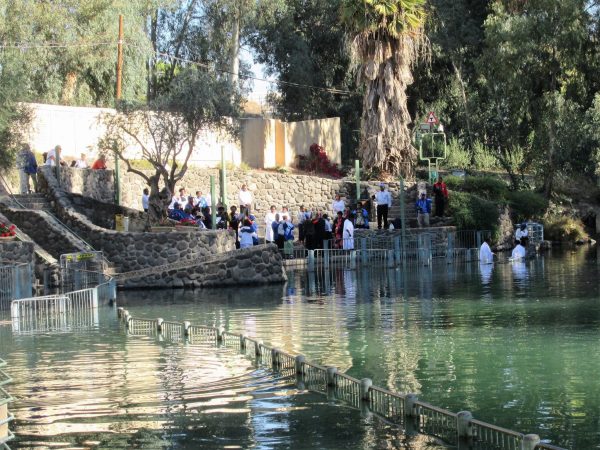 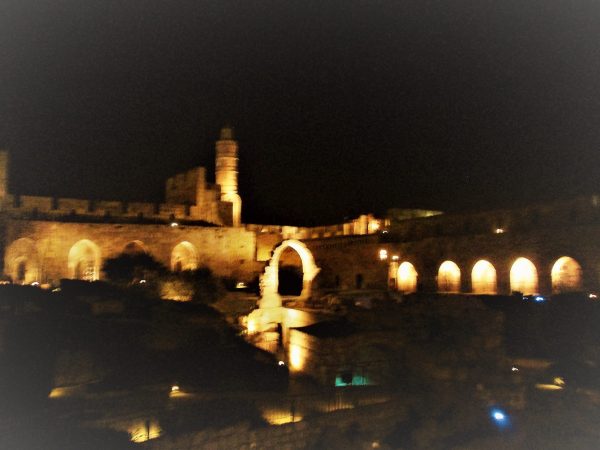 One hour northwest of Caesarea is the city of Nazareth. Our first stop was Mount Precipice where the people of Nazareth did not accept Jesus as the Messiah and tried to push him from the mountain. (Luke 4:24-30). Jesus, however, “passed through the midst of them and went away”. From this site also, you can see Mount Tabor described in the Old Testament as a holy mountain and place of worship. Mount Tabor is also believed to be the site of the Transfiguration of Jesus before Peter, James and John. (Matthew 17:1-13).

There are two sites religious leaders argue as to where the angel Gabriel revealed to Mary that she was with child. One is the Church of the Annunciation, a Greek Orthodox Church. The other site is the Catholic Basilica of the Annunciation. (Luke 1:26-38) Both sites are near each other. A visit to the Church of St. Joseph is believed to be built over the carpentry workshop of Joseph and where Jesus lived as a child.

Another must see is the Nazareth Village. The village is an open air museum of stone and mud structures depicting village life during the time of Jesus. At this site it is believed Jesus spoke the parable of the evil farmers as the museum uncovered in their dig a winepress and watchtower. (Mark 12:1). To see this village involves a lot of walking on uneven stone and is not handicap accessible.

Traveling from Nazareth to Tiberias we stopped at the Lavi Kibbutz Hotel and learned about living in a modern day kibbutz. A kibbutz is a community where every member of the kibbutz shares everything from food, joint ownership of property, and education. Those members working outside of the kibbutz have their salary deposited in a special kibbutz account. Each member is responsible for helping other members by contributing and in return receiving a stipend for expenses. Guests may stay at the Lavi Kibbutz Hotel to learn about this way of life. On Friday nights, the hotel offers a Shabbat meal. Today there are 30 kibbutzim located throughout Israel.

Another site to see on the way to Tiberias is the village of Cana where according to the Gospel of John, Jesus performed his first miracle of turning water into wine. (John 2:1-11). 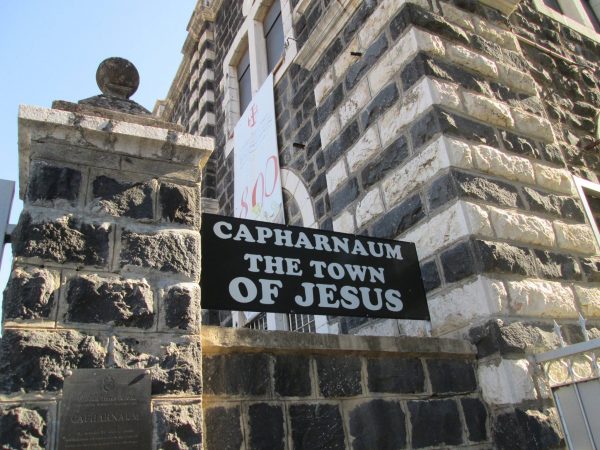 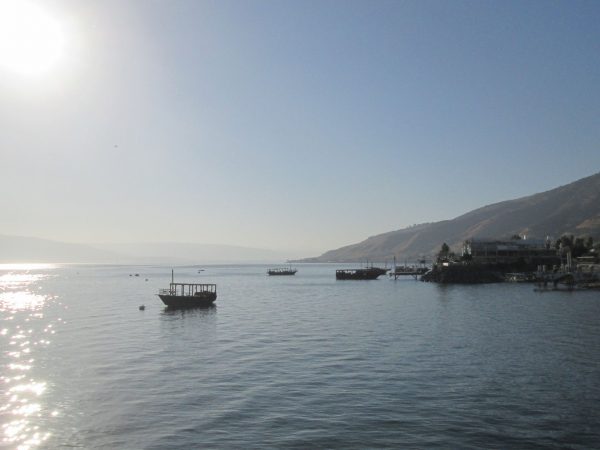 Sailing on the Sea of Galilee

The Scots Hotel, a former Scottish hospital overlooking the Sea of Galilee was our one night stay in Tiberias. The hotel features spacious rooms, a fine dining restaurant in a former maternity ward, and many beautiful gardens.

Along the shore of the Sea of Galilee, the Mount of Beatitudes is located. A Roman Catholic chapel has been erected on this site and Pope John Paul II celebrated mass in 2000. This is the location believed to be where Jesus gave the Sermon on the Mount and listed the Eight Beatitudes. (Matthew 5:3-10).

Three Kilometers from the Mount of Beatitudes is the fishing village of Capernaum.

Excavations at Capernaum have revealed two synagogues that are actually built on top of each other. There is a first-century basalt foundation of the former synagogue where Jesus preached. A white, limestone synagogue was built on top of the first-century foundation in the 4th or 5th century. The Apostle Peter’s house is the site where Jesus healed his mother in law and healed a paralyzed man who was lowered through the roof (Mark 2:1-12 & Luke 5:17-26). Over the House of Peter, a modern chapel has been erected and a statue of Saint Peter holding the keys to heaven. Capernaum is also believed to be the home of four of the apostles.

Another visit along the Sea of Galilee is Tabgha, where Jesus performed the miracle of feeding five thousand people with five loaves of bread and two fish. (Mark 6:30-43)

Magdala also located near the Sea of Galilee is considered to be where Mary Magdalene lived. Currently under excavation, findings include pottery, first century coins, market places, and a synagogue. At this site a boat chapel has been erected commemorating Jesus preaching from the boat. The chapel holds up to two hundred fifty people and can be reserved by groups for worship.

A morning cruise along the Sea of Galilee is a definite must. Jesus boats—a replica of the boat Jesus sailed to calm the waters (Mark 4:35-41) may be reserved for praise and worship. Onboard there is music and time to reflect on Jesus life. A meal of St. Peter fish only found in the Sea of Galilee can be served.

Yardenit and Qasr el Yahud are two baptismal sites of the Jordan River. Qasr el Yahud is the most likely site believed to be where John the Baptist baptized Jesus in the Jordan River. (Matthew 3:13-17) Today, anyone of any religion can be baptized in these waters however you must purchase a white robe for $10.00. Remember to bring a bathing suit and towel to change into beforehand. Our group was fortunate to have a Baptist minister who baptized two in our group. The baptismal site is located on the west bank of the Jordan River (the country of Jordan is on the east bank) and approximately 6 miles from Jericho. Jericho the city in the Bible is where the battle of Jericho took place (Joshua 6:1-27), the parable of the Good Samaritan (Luke 10:30-37) and the story of Zacchaeus (Luke 19:1-10).

From the Jordan River, the trip to Jerusalem is approximately one hour. Our hotel for 3 nights was the Leonardo Hotel. This 3 ½ star hotel is approximately a 15 minute walk from the Jaffa gate of the Old City. We viewed a spectacular sound and light show at dusk at the Tower of David and climbed to the top of the Tower for a panoramic view of Jerusalem.

Visits in and near the Old City of Jerusalem include the Church of the Holy Sepulchre consisting of 30 chapels and worship places. To visit the hill of Calvary, you must ascend stairs which open up to a second level of the church. Here you will visit the Catholic Chapel of the Nailing to the Cross. A more ornate Greek Chapel of the Crucifixion is where Jesus died on the cross. Between the two chapels is a Catholic alter of Our Lady of Sorrows where Jesus is taken down from the cross. Greek mosaics depict the story of the cross, and burial. Also in this area is the Tomb of Christ, where Jesus was buried for three days and rose from the dead. (Matthew 27:32-66) The Greek Orthodox, The Catholic Church and the Armenian Orthodox share ownership of the Church of the Holy Sepulchre.

Adjacent to the Old City is the Mount of Olives, currently a Jewish cemetery. At the foot of the Mount of Olives is the Garden of Gethsemane where Jesus prayed and his disciples slept the night before his crucifixion. (Matthew 26:36-46).

A visit to the Western Wall or Wailing Wall is a must. This site is a place of prayer sacred to the Jewish people and is the only remains of the Second Temple of Jerusalem. Today many people write on a slip of paper what they are praying for and place the piece of paper in a crack in the wall. Each Jewish holiday, people take the slips of paper from the wall and bury it in the Mount of Olives for their prayers to be answered. The Western Wall forms a part of a larger wall that surrounds the Dome of the Rock. The rock over which the shrine was built is sacred to both Muslims and Jews. The Prophet Muhammad is believed to have ascended into heaven from this site and the Jewish religion believes Abraham prepared his son Isaac for sacrifice. (Genesis 22:1-12)

The city of Bethlehem is located 6 miles south of Jerusalem. This “little town” is the birthplace of Jesus where the Church of the Nativity sits over the cave that marks Jesus birth. (Matthew 2:1-12 and Luke 2:1-20). Currently Bethlehem is in Palestinian territory.

Another popular site to visit is the Dead Sea where you can float without sinking due to the high concentration of salt. The Negev Camel Ranch, located in southern Israel, is a farm that breeds and trains camel for you to ride.

Israel, Land of Creation offers much more than a religious destination. Israel is currently looking to attract the next generation by offering not only pilgrimages, but food and wine tours, family adventures and a variety of unique experiences.

Photos contributed by Debra Razbusan of Ed Ventures and The Ministry of Tourism of Israel.