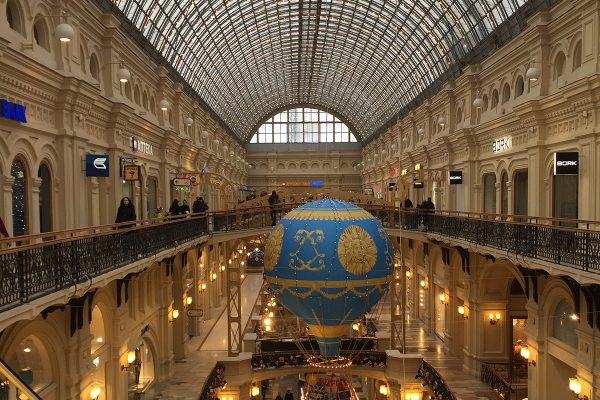 For our journey to Moscow, we traveled by train from St. Petersburg. The Sapsan, Russia’s fast train took four hours, was very comfortable and had a dining car. Because we traveled in the late afternoon it was already dark and we were not able to view the countryside of Russia. Our hotel in Moscow was the Grand Marriott, a deluxe hotel in a perfect location on a busy main shopping street and either a short metro ride to the Kremlin area or a moderate length walk.

Two of the main sites you will want to see in Moscow are Red Square and the Kremlin. Traveling during the Christmas season, Red Square is home to the main Christmas Market. Although we found many Russian ornaments and souvenirs for sale, most of the booths sold typical Russian food consisting of sausages and mulled wine. During the Christmas season the entire city is lit up in lights and Gum, the largest department store in Russia, has their entire building outlined in lights. A visit to Gum is a must with three floors of shops, cafes and restaurants. Be sure to taste the ice cream as Russians love ice cream in the wintertime! In Gum, you will find many high end European shops. 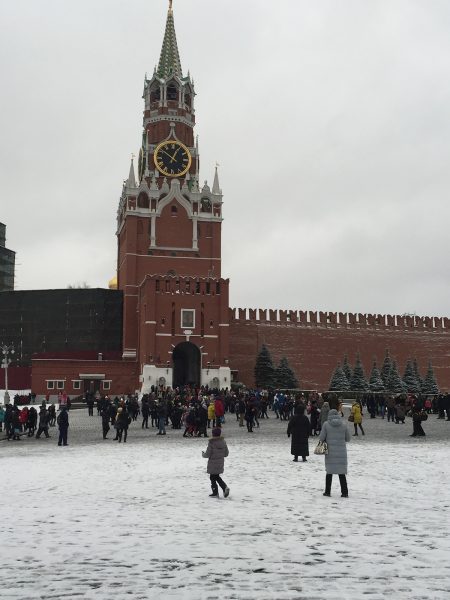 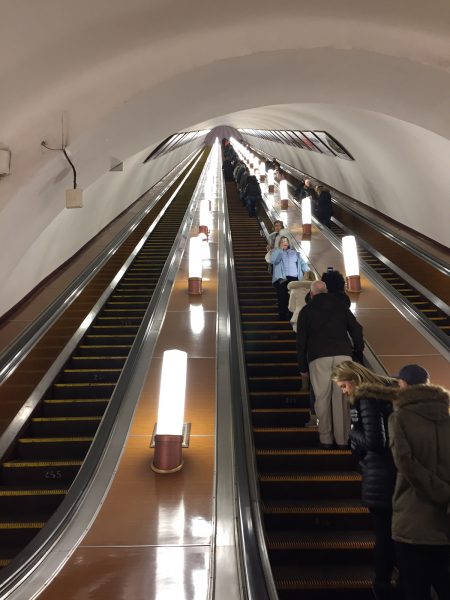 The most famous place to view from Red Square is St. Basil’s Cathedral, known for its colorful onion shaped domes. Legend has it upon completion of the Cathedral, Ivan the Terrible was so amazed at its beauty that he had the architect blinded so he could not design anything more magnificent. Also located on Red Square is Lenin and Stalin’s tombs. Since the end of the Cold War and communism in Russia, few people wish to visit these tombs today.

Red Square is adjacent to the Kremlin. Today, the Kremlin is the official residence of the president and the headquarters of the Russian Federation. Seven churches which are now museums also make up the Kremlin. The Assumption Cathedral is a museum where many coronation ceremonies were held.

The Kremlin Armoury Chamber is a museum that houses over twenty-five thousand dresses, crowns, carriages, weapons, and even stuffed horses. Ten Imperial Faberge eggs can also be viewed. Many gifts from visiting dignitaries are housed in the museum. 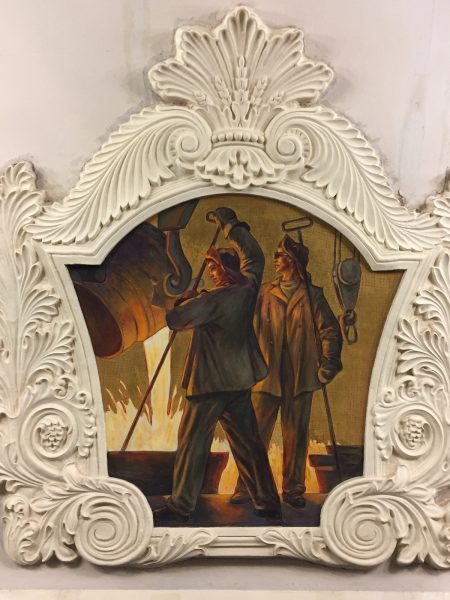 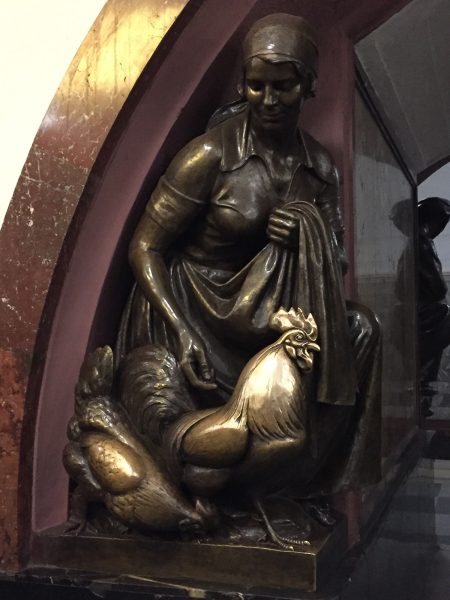 Bronze Statues in the Underground

One hour outside of Moscow is The Holy Trinity Saint Sergius Lavra. The monastery is the spiritual center of the Russian Orthodox Church. This UNESCO World Heritage Site is a working Orthodox monastery and a main center of religious education. The Chapel-at-the Well is built over a miraculous spring where people bring empty jugs to fill as they believe it is the fountain of youth. By splashing the water on you, it is said you will have a very long life, we’ll see! The countryside tour gave us a glimpse of typical Russian small homes made of wood called dachas. Some Muscovites own a primitive cabin in this area for their summer gardens.

While spending three nights in this city of 10 million does not give you time to explore in depth, you can certainly cover the most famous and interesting sights of Moscow. We found the people friendly if not particularly outgoing, possibly due to the language barrier. Central Moscow was clean and an interesting mix of Stalinist era buildings and modern new structures. Travelling with a tour group is not mandatory, but it sure made it possible to maximize our time in the city and learn so much from our knowledgeable and experienced guide.