“A picture is worth a thousand words…”

If you’re like me, you take hundreds, if not thousands, of pictures when you travel—to remind you of the places you’ve explored, and maybe even to instill a bit of envy in folks back home who are following your adventures on social media.  Any time I travel, I have my camera phone and digital camera close at hand, clicking away in the hopes of capturing beautiful images to share.

“Suck it into your soul”

While enjoying a National Parks tour with Collette in 2018, our tour manager, Jeff Whitman, recommended that we set aside our electronic gadgets and really experience the locations we were visiting.  He recommended we try to, “Suck [it] into our soul.”  This was quite impressionable on both myself and my son, Derek, who was traveling with me at the time.  Since then, I snap my photos and then allow quiet time to absorb my surroundings.  It’s these times that prove to be the most memorable part of any trip.  The memories invoked by our senses–an image we see, a sound, a smell, a taste or something we touch.  You can probably think of your own example where seeing a photo from your trip can bring you right back to that exact moment in time, and you feel the emotions wrapped up with that event.  That’s a “Suck it into your soul” moment.

Fast forward to September 2020, while traveling on another Collette tour—this time their Colorado Rockies with National parks tour.  Our tour manager, Heather Larsen, recommended that we take our photos but leave time to soak in the destinations we were visiting.  Sound familiar?

While there were certainly many “Suck it into your soul” moments on my recent Colorado Rockies tour, I thought I’d share my three most memorable moments of the tour with you.

Suck it into your soul – Moment #1

The day was a chilly 40 degrees and overcast with a light misting of rain.  Today, our group was riding one of the few remaining narrow-gauge trains in the world, built in the late 1880s by General William Jackson Palmer to service the small mining towns located in the rugged mountains of Colorado.  At the time the railroad was built, gold and silver were King, and miners needed a way to transport their treasures to the banks in Denver, as well as to import goods necessary for daily living.  The town of Durango was built to house the workers responsible for building the mountain railroads.  The section of tracks we would ride connected the isolated towns of Silverton and Durango—both considered “Wild West” towns in their heyday.

You could hear the soft hissing sound of the steam coming off the engine as it built up pressure for the journey through the mountains.  A shrill whistle announced the train’s impending departure, as the steel wheels searched for traction on the rails, and we could feel the lurching and rocking of the train cars as the train picked up speed.  Through several miles of Cascade Canyon, on what National Geographic magazine has rated the #1 Top Scenic Railroad in the United States, we followed the Animas River up through the San Juan National Mountains.  I stood out on an open-air observation car where I could hear the rushing waters of the river below, smell the aroma of pine trees, hear the clickety-clack of the train wheels, and feel the cold air and misting rain on my face.  The scenery was beautiful, and certainly a “Suck it into your soul” moment of my journey.  You will feel as though you’re traveling back in time.

Suck it into your soul – Moment #2

In the early-morning hours, our motor coach traversed the twists and turns of the nearly 30-minute drive up to the top of Mesa Verde, home of ancestral Puebloans, referred to as “Cliff Dwelling” peoples, when I studied American history in grade school.  The mesa, a flat area at the top, was shrouded in thick fog, and our group wondered whether we’d be able to see anything of the park this day.  Our local cultural guide, Marty, joined us and Mother Nature worked in our favor, lifting the fog as we began our drive through the park, stopping at sites which chronicled the history and daily life of the ancestral Puebloans.

While much remains a mystery, scientific evidence reveals the people of Mesa Verde grew crops on the top of the mesa—corn, beans, squash—as early as 550 AD, and they initially lived in houses dug into the earth, referred to as Pit Houses.  These pit houses had roofs built of pinyon pines and mud—natural resources available on the mesa—and each family compound contained a round room known as a Kiva, or community room where family members gathered, feasted, and held ceremonies.  Eventually, again a mystery as to the reason why but felt to be for safety and security reasons, the Puebloans moved their houses into the natural alcoves found in the sides of the hills.  Here, we were able to see the remains of many houses, including a four-story structure built of mud and wood, as well as large complexes with 20+ rooms, such as one called “Cliff Palace.”  It was interesting to see how hidden many of these sites were within the hillside, and to ponder on how such rudimentary tools as stone chisels and mud could be used to build structures standing centuries later.  Imagine the mathematical skills involved to design a four-story house at that time, or the strength it took to climb up and down the hillsides to haul water and baskets filled with harvested food.  Gaze at the scenery around you and learn how each plant had a purpose, such as the Rabbitbrush plant which was used to make yellow dye; the pinyon pine that was used not only for building and burning, but its pinecones contain nuts for food, and its limbs contain sap used for water-proofing baskets; and the yucca plants whose long fibers and sharp-tipped leaves were used as needles and thread.

Stand on the rim of the mesa, close your eyes and feel the wind flow across your face and whisper in your ear.  Smell the scent of the pinyon pines and feel the contrasting textures of the yucca plant and rabbitbrush plant upon your hand.  You’ll instinctively know you’re standing in a special place, hearing and feeling the same things those ancestral Puebloans experienced all those years ago.  Be still and appreciate this “Suck it into your soul” moment of your tour.

Suck it into your soul – Moment #3

Record temperatures followed by an unusually early snowfall in the higher elevations had us feeling as though we experienced all four seasons in Colorado within a matter of days.  On this day, we anxiously watched the forecast.  Up ahead was a daunting stretch of highway known as Wolf Creek Pass with tight turns, steep slopes, and a 5,000-foot climb to the summit before dropping into the largest and highest Alpine valley known as the San Luis Valley.

Sunlight played peek-a-boo through the clouds as our driver, Frenchy, navigated our motor coach through the challenging Pass.  Snow had been falling overnight, leaving a thick layer on pine tree boughs and the mountainsides.  It’s a beautiful, scenic drive, but don’t look down!  The road disappears from sight as our motor coach makes a sharp turn.  We continue to weave our way through the mountains, climbing higher and higher until, at last, we’re at the summit, part of the Continental Divide.

Stand on the Continental Divide.  Imagine how challenging it was to drive the pass in a modern-day vehicle and then consider how difficult it would have been for settlers who crossed in wagons, blazing a new trail west in the hopes of finding a place to call home on the other side of the mountains.  Close your eyes against the brightness of the sun reflecting off the snow, and feel the cool breeze gently blowing through your hair.  Smell the crisp scent of the snow and the aroma of pine trees.  You’ll think it’s Christmastime.  Watch as a dog enthusiastically leaps through the snow drifts, scooping up snow in his mouth.  Feel how cold the snow is in your hand as you form it into a snowball you lob at a fellow travel companion.  You feel like a kid again.  Suck this experience into your soul.

These moments are just a sampling of what you may experience on the Colorado Rockies with National Parks tour with Collette.  Not only will you enjoy wide-open spaces and beautiful scenery, and the camaraderie of your fellow travel companions, but you’ll learn about the history of the West you’re passing through, as well as the culture of the people who populated the region.  Go back in time as you spend two nights at the historic Strater Hotel in Durango, built in the 1880s as a luxury hotel which still exists today.  Collette guests are able to stay in one of the ninety uniquely-decorated rooms.  Listen to the ragtime music in the onsite saloon, and you’ll realize why famed author, Louis L’Amour preferred to stay in this hotel while writing his Western books, claiming the music from the saloon below his room put him in the mood for writing.  Enjoy a farm-to-table dinner experience at a local ranch.  Stand on a scenic overlook to view Canyonlands National Park, formed by the Colorado and Green rivers—see what water and wind erosion reveal.  Climb inside a giant arch at Arches National Park.  Stand on a bridge, looking down into the Royal Gorge, and then ride a scenic train through the Gorge—experiencing it from two perspectives.

Take tons of pictures to help you remember your Colorado Rockies tour with Collette, but most importantly, remember to take time to suck these experiences into your soul.  You’ll be glad you did!

We traveled over 1,800 miles with Collette tour manager, Heather Larsen, and driver, Frenchy. 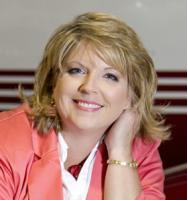